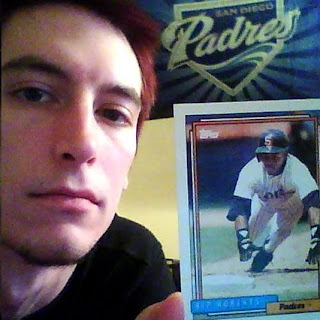 In the only running theme here at Friars On Cardboard that has stuck so far, today, February 10th, is Bip Roberts Day. There's no rhyme or reason behind it, just that I posted a Bip card two years ago as a shoutout to my friend and former brother-in-law Corey who is a big Bip fan and then did it again 365 days later. Well, 365 more have passed so here we are again. Since this has become a yearly event, I went all out this go-'round (that's the way we talk in these parts, tell you what), I went all out and posted five cards instead of the customary one and, in addition to This Year In Bip Links like I did last year, I've gathered together ten (of course) Bip facts you may or may not know. First the facts: 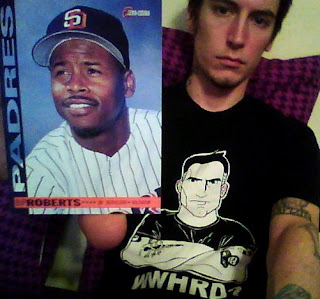 1. Bip was picked from the Pirates system by the Padres in the 1985 Rule V Draft. After spending the obligatory full 1986 season with the big league team, the organization sent him back to the minors for all of '87 and most of '88.
2. Bip is currently employed as an analyst for the Giants. Ugh!
3. In addition to his familiar number 10 that he wore in San Diego, Cincinnati and Detroit, Roberts wore 2 as a rookie and later went on to wear 1 with the Royals, 6 with the Indians and 3 with Oakland. 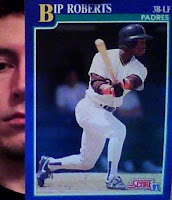 4. He was traded by the Padres to the Reds for "Nasty Boy" Randy Myers following the 1991 season. He promptly made his only All Star team.
5. The second time he was traded by the Padres, it was for another player who would go on to be a San Diego fan favorite. He was sent to Kansas City before the 1996 season for Wally Joyner.
6. Bip played every position in the Majors except pitcher, catcher and 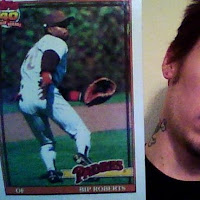 first baseman.
7. In 1997, Roberts was second in the National League with 107 singles. The only man with more was of course his teammate, Mr. Padre himself, Tony The Gwynn.
8. Bip maintained a blog for a little over a month last season. If he's anything like me, he'll come back to it at some point, fire off a flurry of posts in one week and then go back to neglecting it for a while. He can also be found on Twitter.
9. His uncle Roy Shivers played for the St. Louis (now Arizona) Cardinals from 1966 through 1972. He had the NFL's longest kick return of 1966, a 94 yard run. 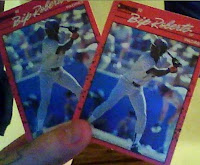 10. In Pedro Martinez's famous near-perfect game in 1995, it was Bip who broke it up in the tenth inning with a double.

On to the links:
The great Punk Rock Paint created a 1988 Fleer of Bip as he didn't have a card in that set due to being in the minors all of the prior season along with a 1988 Topps Traded and a few "relic" cards for Padrographs' contest. He also made a number of Bipoganda posters and a ten dollar Bip Buck.

Speaking of Padrographs, five days ago he featured nine Bips. His entire blog is particularly Bipcentric as you can see from the eight pages of results that come up when you search "Bip" there. He has also cataloged all of his Bips in one spot.

Well, I think that puts a bow on yet another successful Bip Roberts Day. Make it a good one!
Posted by TTG at 6:19 AM

From An Unlikely Source! is just another nerdy baseball card blog. I collect a handful of players but my main focus is Joey Cora cards. You have too many of them and I'd be glad to help you out with that.

Search From An Unlikely Source!