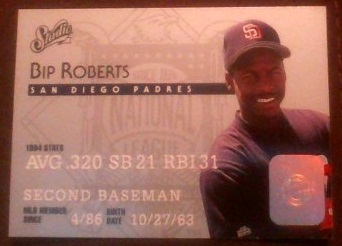 For this blog's fifth annual Bip Roberts day I selected five cards of him I haven't featured on here yet. A little background on Bip Roberts Day: On this date in 2010 I picked out a Bip card to write about, realized that I'd written about one of his cards a year to the day earlier, and thus declared that day's post The Second Annual Bip Roberts Day. I stuck with it in 2011 and 2012 and that brings us to today. 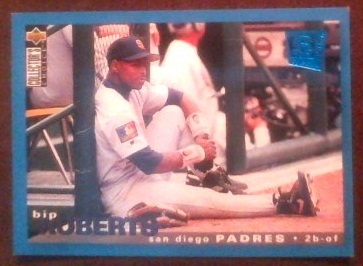 This is an old favorite. I actually featured this one back on my old blog Pads and Ends a full year before the first Bip Day and in fact before this blog existed. 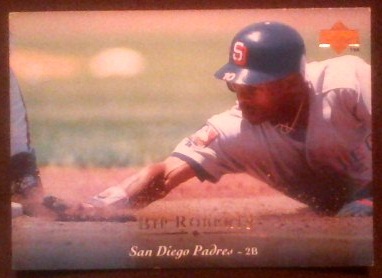 This is a really good shot of Roberts sliding in safely but it's the picture on the back that's interesting. I noticed it earlier when I was doing the prepwork for this post, did a little investigating, and posted what I found over at Gaslamp Ball because I thought it might be of interest to more people than the three of you who read this blog. 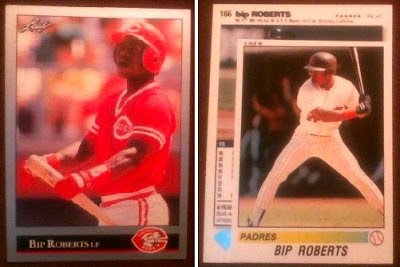 I have other cards of Bip as a Friar that I haven't used on here yet but I decided to toss in one of him with the Reds to mix things up and because I just got it the other day. His helmet got me wondering. He always used separate left- and right-handed batting helmets with the Padres and his twilight teams and even later with the Reds. Before I found pictures of him in a lefty helmet I figured it was because Marge Schott was too cheap to spring for two helmets. That still might be the case for all I know; maybe he asked about it and she said if he wanted two helmets he could pay for them himself and then said something racist to her dog after Bip left the office. I'm just going to assume that's what happened until he tells me otherwise.

The last card is actually not a card at all; it's a sticker. A 1990 Panini sticker, to be specific. I put it on top of a standard 2.5" x 3.5" as a frame of reference. I pulled it from a rack pack this past summer and why, yes, I do believe I have footage of the magic moment.

So, thus brings us to the end. I'll be back tomorrow with probably the hugest trade post I've ever written up. You won't want to miss it; he sent me a ton of really great cards and they were a blast to leaf through- I'll try to do them justice. Until then, take care of yourselves... and each other.
Posted by TTG at 11:49 PM

From An Unlikely Source! is just another nerdy baseball card blog. I collect a handful of players but my main focus is Joey Cora cards. You have too many of them and I'd be glad to help you out with that.

Search From An Unlikely Source!